Should a company remain silent after a tragedy? And, how long are they allowed to remain silent until they are called out on it? That’s what I wondered after the Home Depot shooting in New York today, just a few miles from where I live.

I used to pass by that Home Depot all the time, when I was working at iluminage, the Unilever-backed startup that I cofounded. It was shocking when I heard about the murder-suicide that occurred earlier today, at about 2:40 PM. Almost as shocking was the fact that social media was abuzz about the Home Depot shooting – yet there was one important voice missing.

You could read about the shooting and here commentary from social handles of The Guardian, CNN, the Wall Street Journal, and the many other sources. Seemingly, the only place you couldn’t get any information was from Home Depot. This, despite the fact that customers and employees were tweeting to @HomeDepot and publishing to Home Depot’s Facebook page. 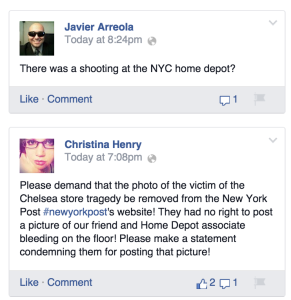 In a time like this, even before all of the facts have a emerged, I just think it’s very important that in organization acknowledged that something happened. After an event so tragic, constituents are hurting emotionally, and hearing from the organization in question can only help. I truly do feel for Home Depot management for having to deal with a tragedy like this – just like I feel for its greater community, that would appreciate hearing a few words from management.